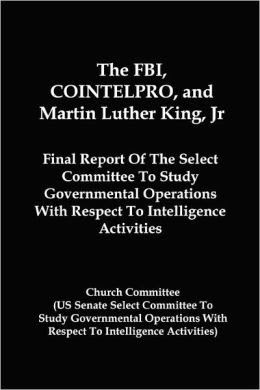 On this Reverend Doctor Martin Luther King, Jr. Holiday, this writer has chosen to provide you with a copy of the Senate Committee Report regarding the campaign to demonize, marginalize and discredit Reverend Doctor Martin Luther King Jr. Upon reading the content of this report, your esteem for the man should be exponentially increased upon understanding that the weight of the US Government, FBI, Law Enforcement and National Security Agencies were brought to bear upon him and against the Civil Rights Movement.

This writer further deems it necessary and appropriate public service to re-post this report as there seems to be a concerted effort by the government to take down web sites containing this reveal, enlightening, embarrassing and provocative information. (Several websites this writer
has previously linked to no longer exist) This writer hopes that the many copies he posts on the Internet will allow Americans for at least the next 100 years to have access to this document which irrefutably demonstrates the true nature of our government and its attitude towards rank and file Americans in general, and the voices of political dissent in particular.


This document goes a long way to erasing the deliberately false
perception of reality rank and file America has of its government,
Judicial System and Law Enforcement. A false perception of reality
painted by our major media and Hollywood, at the direction the one and
only one ruling class pretending to be two major political parties. The
reader is asked to bookmark this page and make a special effort to
commit an overview of the contents of this article to memory? Why?
Because major media and Hollywood have an almost infinite amount of
hours painting your false perception of reality, and this writer may
only have this one shot make you conscious of a truer perspective of
reality.

While major media and Hollywood paint a romanticized, benevolent
picture of the FBI and Federal Law Enforcement, this report documents
Law Enforcement and National Security organizations allowed to go rogue
for the sole purpose of undermining the effectiveness of Rev. Dr. Martin
Luther King, Jr. in advancing the cause of civil rights.

However, the reader should realize that this activities extend to all
voices of political dissent. At various times, Labor Unions, Political
Parties, Political Groups (Communists), Tax Protesters and other voices
of political dissent have been the targets of FBI, MLK-like COINTELPRO
Operations. Here is another quote by FBI Director:

Purpose of counter-intelligence action is to disrupt [Black Panther Party] and it is immaterial whether facts exist to substantiate the charge. If facts are present it aids in the success of the proposal but the Bureau feels … that disruption can be accomplished without facts to back it up.
J Edgar Hoover, FBI Director 193?-1972 Memo (16 Sept. 1970)


The governments attitude towards rank and file Americans is perhaps
best summed up by FBI Director Hoover, head of the FBI and its
predecessor organization from 1924 until his death in 1972.

“Yet the individual is handicapped by coming face to face
with a conspiracy so monstrous he cannot believe it exists. The
American mind simply has not come to a realization of the evil which has
been introduced into our midst. It rejects even the assumption that
human creatures could espouse a philosophy which must ultimately destroy
all that is good and decent.”
FBI Director J. Edgar Hoover, (January 1, 1895 – May 2, 1972) was the
first Director of the Federal Bureau of Investigation (FBI) of the
United States. Appointed director of the Bureau of
Investigation—predecessor to the FBI—in 1924, he was instrumental in
founding the FBI in 1935, where he remained director until his death in
1972) The Elks Magazine, August 1956 http://goo.gl/KdzcyA


To this writers mind, it appears that this investigation was done and
this committee report created only under intense political pressure.
This writer speculates that the powers that be finally gave in and
published the report knowing they controlled the major media and the
report would likely languish unread (very many) in some file cabinet in
an obscure back room of the Senate. No one concieved of the present day
miracle of the internet which would make dissemination of such data
cheap and easy for rank and file Americans in general, and the voices of
politcal dissent in particular.

And as you read, please contemplate this: Who controls the FBI? Our Government? Someone outside the Government? The Political Party in control of the government at the time? Which political party was in control at the relevant time? What is the true nature of our government? What is the true Nature of the FBI? Who decides what political dissent should be oppressed? Can a "Too big to fail bank" give a legal bribe known as a campaign contribution (Shakespeare: A Rose by any other name would still smell as sweet) to suppress witnesses against it? What does political dissent mean? If someone has evidence of a crime committed by a "Too big to fail bank", can they ask the FBI to COINTELPRO the witness? Which side of the abortion debate should be subject to an FBI COINTELPRO Operation? Which side of the gay marriage debate should the FBI oppress? Should the FBI do COINTELPRO Ops on folks who complain about high taxes or Obamacare? Has this writer made his point?

While the document is long, and sometimes dry and boring, this writer
asks you to read at least the first two underlined paragraphs.

From December 1963 until his death in 1968, Martin Luther King,
Jr. was the target of an intensive campaign by the Federal Bureau of
Investigation to "neutralize" him as an effective civil rights leader.
In the words of the man in charge of the FBI's "war" against Dr. King:

No holds were barred. We have used [similar] techniques against
Soviet agents. [The same methods were] brought home against any
organization against which we were targeted. We did not differentiate.
This is a rough, tough business. 1


The FBI collected information about Dr. King's plans and activities
through an extensive surveillance program, employing nearly every
intelligence-gathering technique at the Bureau's disposal. Wiretaps,
which were initially approved by...

To continue reading for free, please click here http://t.co/v80G30jLxV
Those were my thoughts.
In Closing:
Thank you, my fellow citizens, for taking your valuable time to read and reflect upon what is written here.
If what is written here rings true to you, perhaps you should contact
your local elected officials and let them know. If you are afraid of
repercussions, snail mail it anonymously and ask them to respond in the
local paper or their own monthly/quarterly internet newsletter. Even if
this article refers to something outside you geographic area, it still
likely applies to your location. Remember all those taxpayer training
junkets we taxpayers send the bureaucrats on? They all learn the same
“livestock management” techniques to use on WE THE PEOPLE.
And that leaves WE THE PEOPLE with this conundrum: While our
#Government works full time with compensation and funded with our money
for the cause of #Tyranny; WE THE PEOPLE are forced to work part time
without compensation for the cause of #liberty with what is left over of
our time, money and energy.
Finally, this article is written with the same intentions as Thomas Paine http://ushistory.org/paine. I seek no leadership role. I seek only to help the American People find their own way using their own “Common
Sense” http://amzn.to/kbRuar
Keep Fighting the Good Fight!
In Liberty,
Don Mashak
The Cynical Patriot
http://twitter.com/dmashak
http://Facebook/Don.Mashak
Don Mashak Google Plus http://goo.gl/1AUrE
WE THE PEOPLE TAR #WETHEPEOPLETAR
http://WETHEPEOPLETAR.blogspot.com
http://facebook.com/WETHEPEOPLETAR
http://twitter.com/WETHEPEOPLETAR
End the Fed(eral Reserve Bank System) #ETF
National http://bit.ly/ta3Rju Minneapolis http://bit.ly/tjZJKF
Bring Home the Politicians #BHTP
http://BringHomethePoliticians.com
Lawless America #LawlessAmerica
http://LawlessAmerica.com
Term Limits #TermLimit
http://TermLimits.org
Justice in Minnesota #JIM
http://JusticeinMN.com
Critical Thinking Notice - This author advises you as no politician would dare. Exercise Critical Thinking (http://bit.ly/ubI6ve)
in determining the truthfulness of anything you read or hear. Do not
passively accept nor believe anything anyone tells you, including this
author... unless and until you verify it yourself with sources you trust
and could actively defend your perspective to anyone who might debate
you to the contrary of your perspective.